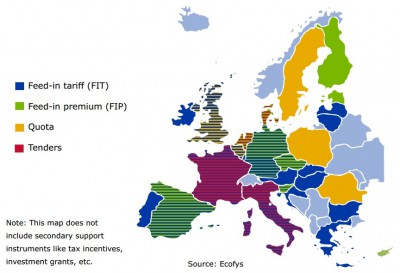 The development and approval of the Albanian Market Model (AMM) is in the
final step towards the development of the Albanian Electricity Market into a
fully competitive power market in line with the Energy Community obligations.
This approval is part of the reform that the Government of Albania (GoA) has
undertaken for the reconstruction of the Electric Power sector, pursuant to the
new Power Sector Law and the policies of the Government for the development of
this sector.

The AMM is, firstly, developed according to the requirements of Energy
Community Treaty for the creation of the Regional Market of Electrical Power,
as ratified by the Parliament of Albanian in 2006. Under the Energy Community
Treaty, Albania committed to implement the Third Energy Package, as adopted and
adapted by the Ministerial Council in 2011.

Secondly, Albania committed to implement a number of short-term goals in
the framework of the so-called “Berlin” (Western Balkan 6) process at the
Summit in Vienna on 27 August 2015. The present Market Model aims at supporting
the implementation of those commitments in the framework of the Power Sector
Law and relevant secondary legislation.

Thirdly, and closely linked to the previous two developments, process
towards the establishment of an Albanian Power Exchange (APE) has been
initiated which also requires further alignment of the electrical power market
in full compliance with the Energy Community. It is expected to provide a more
enduring structure than the previous model. The new model will also allow for
further regional integration between Albania and its neighbouring countries.

AREA
Association, taken note of the project of “New Albanian Energy Market Design, Version 2.0”, with the aim to provide its contribute on the
new Albanian energy market design, in representation of the investors in the renewable
energy sector in Albania (“Producers”), has continuously observed that the issue of a new market
design has to balance many different interests, amongst others it shall ensure
the provision of sustainable, secure, safe, reliable electricity and respect
the foreigners and national investments. Then, specifically our concerns
focused on the provisions regarding the shift of the support schemes from feed-in to the Contracts for Differences
(CfD) and the inclusion as Balance
Responsible Parties (BRPs) to the run of rivers renewable energy Producers.

We
are aware of the common policy of the EU and the EnC on the phasing out of feed
in tariffs schemes and the intention to make market participants above a
threshold BRPs. These provisions, clearly reflected in the European Commission
Guidelines ‘On State aid for environmental protection and energy 2014-2020’
(‘Guidelines 2014’), state that the new requirements should not affect the existing
support schemes. The Guidelines 2014 establish that all measures previously
undertaken to support renewable energy producers shall be assessed in
accordance with the rules in force on the date on which such measures were
granted.

Therefore,
any substantial change to the existing support schemes, including imposing
balancing responsibilities, will be consider a deep breach to the concessionary
agreement, the purchase agreement and renewable energy law in Albania. Intervention
that would heavily affect and frustrate the investments and the commercial
operation of existing small hydro-generation projects in Albania, bringing them
to default under debt financing agreements or insolvency, especially in the
case of energy facilities which have been put into operation or for which a
significant part of the construction has been carried out.

Instead
regard the new installations, the issues of the market design have an overall
dimension and need to be considered with a long term and stable mechanism,
searching to address first of all, through a predictable regulatory framework
as a prerequisite for ensuring low-cost financing for investment in RES-based
generation, as it keeps risks to a minimum. In this respect, policies aimed at
achieving RES development based solely on market signals should be carefully
considered, taking into account the actual level of competitiveness (parity grid)
of RES technologies as well as deployment objectives of the EU policy of 2020
and 2030.

The
electricity market design performance will encourage the entrance of RES
generation into the market. For the integration of the SHPPs into the market,
given their intermittent generation characteristics, this will be achieved when
a well-functioning short-term and liquid market will be established. Having
short-term electricity markets, is a precondition for the support to investments
in RES-based generation to be increasingly driven by market signals. Then in
the medium/longer-term, the improvement of Emission Trading System (ETS) will
become the main driver for investments in RES-based generation.

In
this respect, a full market liberalization and regional integration of
RES-based generation is limited in our view by three types of obstacles:

a)
The lack of a level playing field: some RES technologies cannot bear the same
responsibilities as other market participants. In particular, balancing
responsibility should apply to generators in respect to their characteristics (i.e.
free run of river Shhp cannot
compete with the HPP with reservoir), in order to incentivise all the market
participants in an equal level.

b)
The lack of a functional market: RES-based generation forecasts are only
reliable when made very close to real-time. It is, therefore, crucial that
RES-based generators can have access once there will be already
well-functioning liquid short-term markets in which they can sell their electricity
output and balance their positions or support the system balancing.

c)
Financial support must be provided to support RES generators production during
off-peak time of electricity prices on wholesale markets. This must also be linked
to the right of RES for priority dispatch on peak time and the needs also to
adjust the other technical problems of the system and its overall efficiency to
their absorption.

The
ways to remove these obstacles and to move to the full integration of RES
generation may include among others: ensure that the balance responsibility
applicability take in consideration the characteristics of each type of
generation, maturation of the technology and the market liquidity context of
reference; ensure that the short-term markets are efficient and accessible by
all types of market participants, and that short-term market gate closures
(intraday hub, cross-border intraday, balancing energy bids) are harmonised as
close as possible to real time, and all intraday trade (internal and
cross-zonal) is harmonised to 15 minutes products; monitor and extent the appropriate
financial support scheme in the promotion of RES generation behaviour.

However,
the above rationale for supporting RES, it shall also be kept present, that namely achieving not
only 38% of the target but above all to prepare for the upcoming share effort
of the EU Policy of 27% in the final energy consumption by 2030. Hence,
realising a fully integration of RES in the market is at least a mid-term
objective for which we must have a caution and progressive exposing of the RES
generation to the market signals. In this regard, the latest State Aid
Guidelines issued by the European Commission already address the obstacles
listed under the points above, requiring to be followed by national enforcement
authorities in order to ensure their uniform and homogeneous application in the
CPs of Energy Community.

In
conclusion of all the above remarks,
Association AREA, evaluate that the proposed model (Albanian Market Model,
Version 2.0 19-11-15), has to be consider a model that shall affect only new
producers and the newly provided support schemes. As well as we want to
reiterate that, any unlawful revision and limitation of extent to the power
purchase agreements already in force will be consider in a deep breach of the
contract protected by the bilateral investment treaties and the acquis communautaires. The time limitation of the existing PPAs
established in accordance with the applicable legislation and best practice
standards, constitutes a droit acquis
of the existing small producers.

In respect of the above, AREA Association requests a more holistic approach in
designing and launching the Albanian future energy market. In the interest of more
than 550 mil Euro of investments that we represent, we believe in the positive willingness
of all the authorities involved to contribute, within the institutional duties
that cover, to influence in resolving of the above concerns, taking the
appropriate measure that would guarantee sustainability to the existing
investments and would allow their normal operation with a reasonable return on
investment.